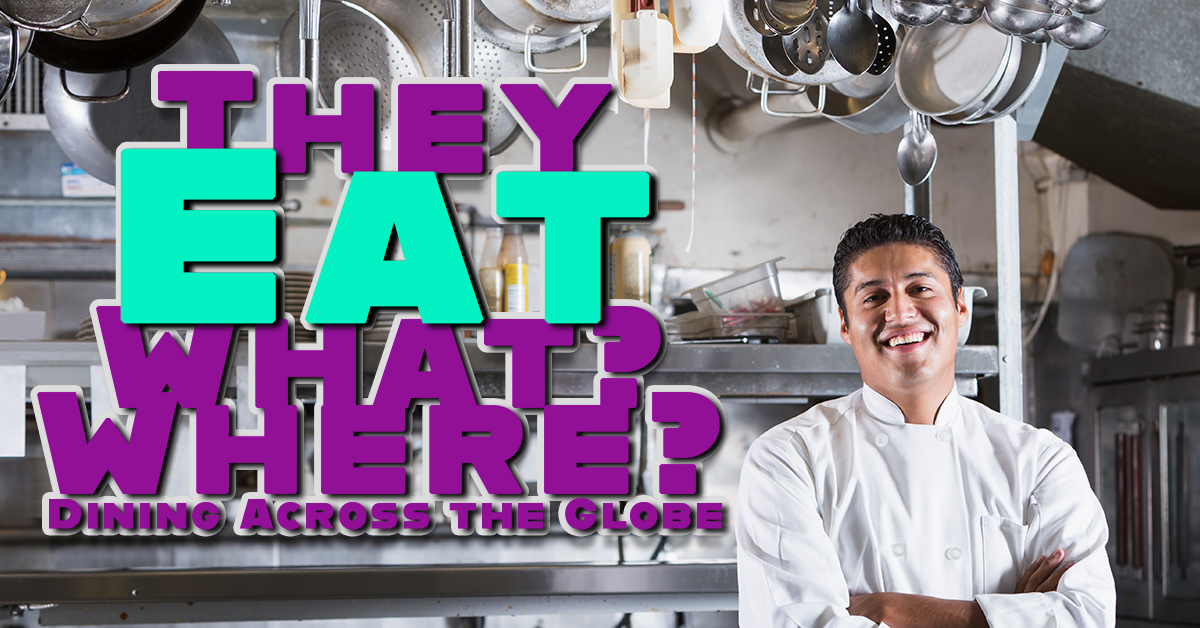 They Eat What? Where? Dining Across the Globe

We tend to think of what we eat in the United States as “normal”. In other parts of the world however, what they dine upon is often based on affordability and availability. Many cultures make use of more animal parts than others and what some may find as exotic others view as disgusting. Here are some strange, interesting and odd foods that some cultures may even view as being delicacies.

These land snails are considered a delicacy in France, Portugal, Spain, and yes, even in the United States. Escargot are often prepared with butter, garlic, parsley along with a wine sauce. Specific escargot are considered such a delicacy because they come from the Burgundy region of France.

It probably shouldn’t be surprising that kangaroo are farmed for their meat in Australia. While common Down Under, kangaroo meat is exported as a delicacy outside of Australia and is best when prepared like beef and served medium to medium rare.

This national dish of Scotland consists of the internal organs of sheep cooked inside of the animal’s stomach lining. It is said to have an earthy taste and is frequently served with mashed potatoes. You had me at internal organs.

Alligator is a popular meat in the United States, particularly in the Southeast and is actually one of the more controversial foods prepared in the world. The meat from alligator tail is particularly popular.

This dish, considered a delicacy in the Philippines, frequently makes the lists of most exotic dishes from around the globe. While most eggs consumed are unfertilized, Balut is a fertilized egg that is cooked while still developing. It is described as unappealing to look at and is often referred to as “slimy” in texture. What’s not to love?

Many parents encourage their children to “at least have a taste” when it comes to trying new foods. As we grow older however, many of us lose our own sense of adventure. When was the last time you tried something totally new for dinner? Balut or Haggis may not be on your shopping list but there are a world of dishes from around the globe waiting for you to explore.