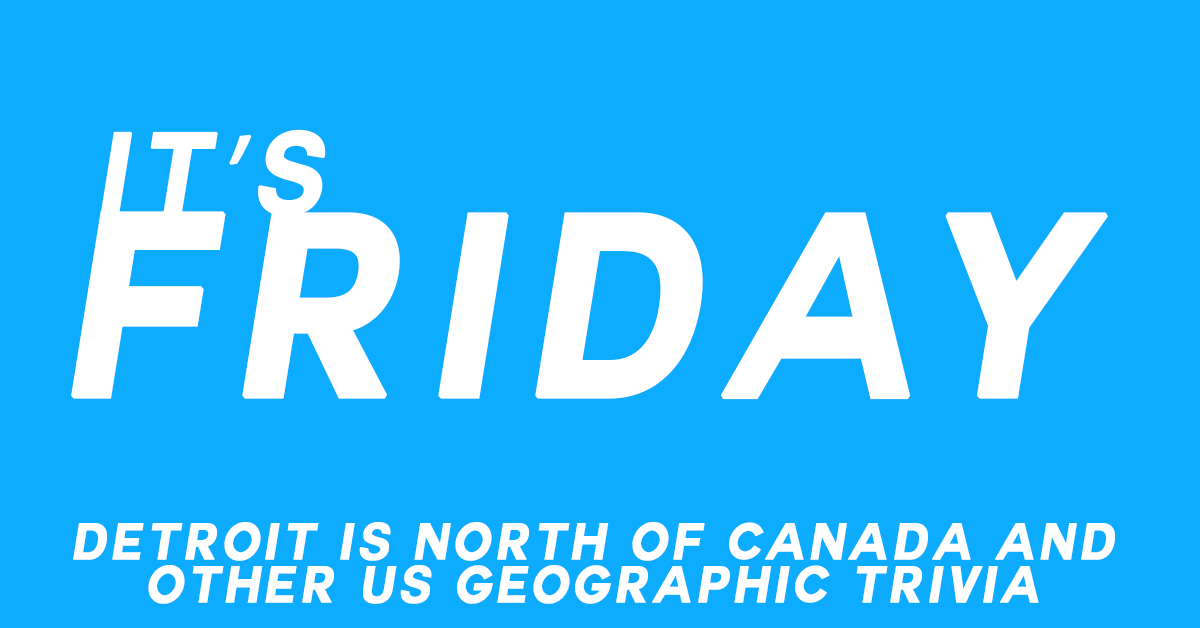 Detroit is North of Canada and other US Geographic Trivia

Do you think you have a pretty good handle on how the United States is laid out geographically? There’s Canada to the North and Mexico to the South. The Atlantic Ocean borders the East Coast while the Pacific serves as the Western boundary. In between, however, there are some interesting geographic anomalies and facts.

Detroit is North of Canada

Drive directly South from Detroit, Michigan and you will actually end up in Windsor, Ontario, Canada. It is the only major U.S. city that lies north of Canada.

The Florida Mainland is as Wide as it Is Tall

Most recognize that Florida is a long peninsular state. In fact, driving from Jacksonville to Miami will take about five hours and fifteen minutes, covering about 345 miles. Driving West to East across the top of the state however, from Pensacola to Jacksonville will take a similar amount of time, about five hours covering 358 miles. Of course, this doesn’t include the Florida Keys.

West Virginia and Virginia Were Once a Single State

Prior to 1861 and the Civil War, West Virginia and Virginia were part of the same massive state, covering as much area as Pennsylvania. West Virginia is the only state to be formed by seceding from another.

The Most Common Place Name in the U.S. is Washington

The Geographic Center of the United States

The geographic center of the 48 contiguous United States is 2.6 miles northwest of the center of Lebanon, Kansas. As of the 2010 US Census, the population of Lebanon was 218.

South America is South and East of Miami

It may seem contrary to our vision of the globe, but almost the entire landmass of South America is actually south and east of Miami.

Sometimes, things are not always as they seem to be. That can be the case with geography and when it comes to getting the best rate for your auto, health, or life insurance. An independent insurance agent, however, can help assure you are getting better coverage at a price you can afford. Our independent agents work for you, not an insurance company. Contact us and let’s get started on saving on your loss prevention products.